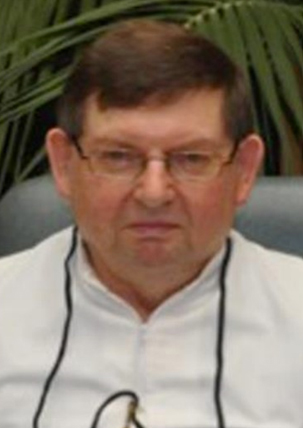 It is with sadness the Rosalie Old Boys’ Association wish to advise of the passing of our fellow school mate and friend Br. Cas Nowak.

Cas entered into eternal life on the morning of 17th. February 2022 at Molloy House, Campbelltown.  Cas has endured severe ill health in recent years and is now at peace.
Cas was the second son of, Wladyslaw and Anna. Cas migrated to Australia with his family in December 1950. Cas was just three years old at the time.

Cas will be remembered fondly by fellow students from the Class of 1965.

At school Cas was well known as Charlie and was one of three brothers of the Nowak family that attended Rosalie in that era. The others being Joe and Barry.

Cas connected with the Marists as a student at Rosalie where he came under the influence of Brothers, such as Cyprian, Harold, Austin Tanzer and Ernan Morgan who encouraged him to consider a vocation. At school Cas was active, involved and much liked. In his senior year he was elected College Captain.

After completing school Cas left home for Mittagong where he commenced his Postulancy in January 196 and entered the Novitiate in July 1966. Here, as at school, he was seen as a leader. The other novices looked up to and respected him. The Novice Master at the time, Br Fergus, described him as “a virile and admirable character”. He was lively, sociable, good at sports and had a natural way with people.

After just a single-year Scholasticate, Cas was appointed to Campbelltown and then to Auburn. These were memorable years. Of particular note were the Auburn fundraising bottle drives that were much used at this time. He recalls: “Br Kevin Herlihy was the Director of Operations. He was the bottle king. We collected hectares of bottles and built a library. It was humble work; a Brothers’ task”. He contributed where he could. He went on to teach in the Soloman Islands, Kieta, Cairns, Ashgrove and Rosalie – his old school. Here he was very supportive of the ex-students.

At the age of 40 Cas went back to the books and, with great determination, successfully completed his Bachelor of Education. He took on general duties at Dundas and Westmead. He then retired from active ministry in 2002.

Cas was a man of deep faith with a profound belief in the saving power of Jesus with whose sufferings he identified. He often quoted the words of St Marcellin “Mary has us in her mind, heart and arms”. He believed that to live authentic Marist religious life we need to reciprocate: we need to love her.

Cas valued the support and assistance of his fellow Brothers. His most cherished memories included holidaying with the Brothers at Tugun, of surfing with Ken Moreland at Bondi, travelling to Cobar for pig shooting with Kev Herlihy, going to the movies with Vince Shekleton and sharing prayer with Greg Moran.

He gratefully recalled the inspiration he was given by Br Fergus and Br Michael Donnelly, whom he always remembered on their anniversaries. He acknowledged the love and affection he received from Br Harold and Paul Maranta.

He was very grateful to these men and many others for their brotherly support. Cas always maintained a marvellous sense of humour. He would ring Brothers for their birthdays and always end the call with an amusing story.

Cas was a prolific letter writer and had a wry sense of humour and always ended his letters with a joke.

He never forgot his roots from Rosalie and after he received his copy of the “Cerise and Blue” Newsletter by mail he always responded gratefully with thanks for remembering him.

In any difficult situation Cas always persevered and remained faithful. At the time of his Golden Jubilee in 2016, Cas reflected: “When I was 25 I wanted to be Provincial. Now I am 67 years, I am content to be a contemplative who works on his personal growth.

Cas died at sunrise, and that the sky over Campbelltown was beautifully coloured with a tint of full moon and a gentle breeze. It’s as though heaven was delighted at the news of Cas’s arrival! Cas has returned to his true homeland and is now in the peaceful and loving embrace of his God and his Good Mother.

Refreshments will be available following the service at Wests R.U., Sylvan Road, Toowong from 1.00pm.