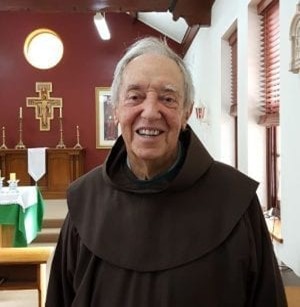 It is with regret that we serve notice of the passing one of our most Senior Rosalie old boy.

He went from Ashgrove to the Franciscan minor seminary at Robertson NSW. Novitiate in 1950 and was ordained at Stephen’s Cathedral in June 29th 1957.

Fr. Cormac Was at the first session of Vatican II (still have the entrance card),official secretary to two bishops at the Council. Post -grad studies in Moral Theology at Catholic Uni. Washington DC. Lecturer in Moral Theology from end of 1965 at Franciscan Seminary and then at the newly formed Yarra Theological Union.

Cormac died on the morning of Tuesday 4 May 2021, at his residence in Box Hill, Melbourne, Victoria.

Cormac was born on 4 December 1932 in Brisbane and was baptised Malcom. He entered the novitiate of the Franciscan friars on 17 February 1950, and on 22 February 1954 made his solemn profession as a friar, and was ordained a friar priest in Brisbane on 29 June 1957.

After completing his doctorate in canon law in Rome, Cormac completed a post-doctoral fellowship in moral theology at the Catholic University of America, Washington, USA.

On returning to Australia, Cormac lectured in canon law and moral theology, and was ministering as an ethicist in Catholic healthcare facilities, and advisor to several bishops and others, especially in the areas of canon law and ethics. He was a formator and was elected to the Provincial Council of the friars. Then, at the age of 44, he was elected Provincial Minister, and then elected to the General Council of the Order, being based in Rome.
In 2015, Cormac was awarded Catholic Heath Australia’s highest honour, the Maria Cunningham Lifetime Contribution Award 2015, at the annual Catholic Health Australia Awards held at Parliament House, Canberra.

Cormac’s Funeral was held at St Paschal Chapel, Box Hill on Monday, 10 May 2021.

Cormac waas interred in the Friars Cemetery in the grounds of St Paschal Chapel.

Some remembrances bear repeating: “He was a wonderful person who applied the law in a most pastoral way. He worked with integrity and was always pleasant and helpful. … Thanksgiving for a life well lived with compassion for others. … A kind gentle unassuming person who shared his deep learning and natural compassion without fuss or pretension.”