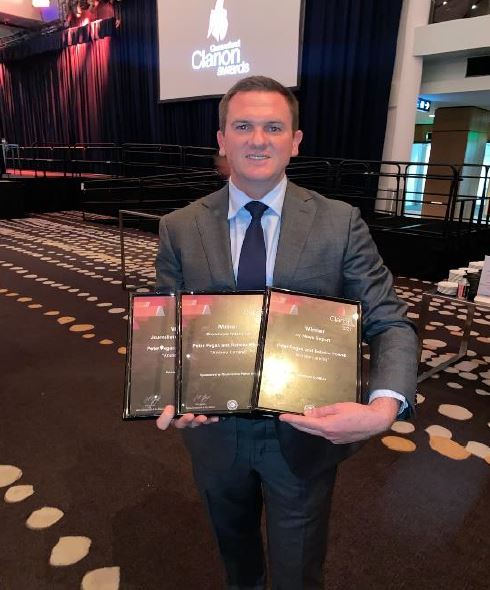 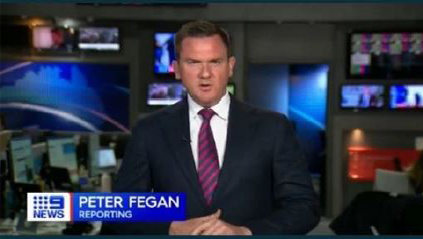 We have received the following story from 9 Network Journalist and Presenter, Peter Fegan. As you can see Peter has received prestigious awards in his chosen field. We are proud of Peter, as we are, of all Rosalie “Old Boys”. We welcome more articles like this from past students.

If you turn on the Channel 9 News you will often see Peter proudly displaying the colours of Rosa in his tie.

Circa 1998, a group of at least 20 young, scruffy, kids sit in a line at Indooroopilly Train Station waiting for the 7:50 Nambour all stations, our destination? Milton. Now, for many of the group, Indooroopilly was essential for our travel to school, some of us lived in the outer western suburbs, such as Kenmore, Moggill and Bellbowrie. Then there were those that had no reason to be at Indooroopilly Train station other than to catch up with their mates before school, and that’s what separates Rosa Boys from the rest.

We were more than mates, we were brothers. Sure, we were banded by differing circumstances, our families were from different parts of the world, heck, we may not have even known each other that well, but we spoke and acted as if we had grown up together.

Now I have a gripping admission to make, I wasn’t always a Rosalie student. My earlier secondary schooling I attended Gregory terrace. Now before you all start booing me, I want to make something very clear, I will always be a Rosa Boy. In fact, looking back, one of my greatest regrets was not asking my parents to send me to Rosalie in grade 8.

I still remember my first day. I already knew most of the year 11 and 12 kids, and when I walked through the gates for the first time, I was flanked by names already synonymous throughout the halls of Fernberg rd. Names such as O’leary, Meier, O’Donoghue, Moon, just to name a few, but I was still nervous, nonetheless. Nervous that maybe I wouldn’t be baptized into the Fernberg
Family, nervous I wouldn’t belong, nervous I’d let the famous crest down. But it was thanks to the likes of the names mentioned that I was able to overcome the timidity, and it paved the way for 2 years that I will never, ever forget.

For the last 15 years or so, I’ve lived south of the border, the majority of which was spent in Sydney, where I worked as a journalist for the 7 Network.

Recently, I’ve returned home to Brisbane. It was adverse circumstances that landed me back here, but now I have begun a new journey. In January I accepted a role with the 9 Network. Now at first, the transition was daunting. Re-adjusting to life in Brisbane hasn’t been easy, and even know I was born in bred here, the changes to the city made it seem as if I was living in a different country.

Bouncing back from adversity can be likened to dragging a Mack Truck around with you everywhere you go, and yes there were times I thought it was too hard, that maybe I would never bounce back, I wouldn’t be human if I didn’t. Then one day, my prospective changed and I owe it all to a trip up Fernberg Rd.

I still remember the day as if it was yesterday. I sat in my car, parked on Fernberg Rd, staring aimlessly at the old brick building we all use to refer to as simply, 58. I’ll admit, I was down. But as I sat, I started to remember my days at Rosalie. See, it was adversity that landed me at Rosa in the first place, and those feelings I had on my first day were the very feelings I was experiencing at that exact moment. It’s then it dawned on me, all Rosa Boys, at one stage of their lives, stared aversity in the face, and most of us were able to overcome it, that’s what defined us, that’s what being a Rosa Boy was all about. None of us had it easy, but all of us were tough.

Fast forward two months to March 27 of this year, and not only did I break the biggest story of my career, but it was of the biggest stories in the country. A story so big, it threatened to change the course of Government. A Federal member of Parliament had been accused of bullying women, and I was there to tell the story. There I was, only two months earlier, the lowest I think I’d ever felt, and now I was back on top, and I owe it all to that trip up Fernberg rd.

October this year, I was named Queensland Journalist of the year, one of highest honors a journalist can receive. I have also been nominated for a Walkley Award, recognized alongside the best journalists in the nation. Working on Mt Coot-Tha, I will often drive the long way home through Rosalie. It’s hard to look at the old buildings just sit there, but while Rosalie may have closed its doors, the Cerise and Blue spirit will live on for eternity.

Tell us your Story!

Are you an old boy or former staff member of Marist College, Rosalie? We would like to hear from you. Telephone Jim Griffith on 0419 715 697 or email your name, address, and the year you finished at the College to info@rosalieoldboys.com.au